We went to a slew of museums today, and saw fabulous things that were really, really old, and it was dazzling in size, scope and depth. We went to a museum that dealt with the rather unfortunate, but hardly original (in historical terms) way the Germans decided to deal with the Jews, Gypsies, and multitudes of other who failed to live up to the Arian ideal. It was moving, depressing, and left you shaking your head at how one group of people could treat another like that, and then you remembered the Germans had their thing, and we had slavery.

BUT, that’s not what this is about (although I will post some pics of the first museum). This is about a meal. You can learn about museums in lots of places. You can learn about history by going to school (albeit, some states have decided to rewrite more than usual, yes I am speaking of my home state where elementary and high school education has become something of a burden to the taxpayers, so they just opted to cut out the fat of facts and science), or just by living a long time. But learning where to eat good vegetarians chow is what today’s column is about. We ate at a vegetarian place called Cookies Cream. It is located down, way down, an alley (past the dumpsters). There is no sign. The door is locked. There is a chandelier. You have to know to push a very inconspicuous button. 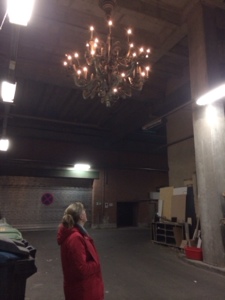 You had to have reservations. It was like an SNL skit. The maître de could have, at any moment said, “ve vil now dance”. You had to spend a non-trivial amount of Euros for a no-meat 3 course meal.

It was unbelievable. I had the quail’s egg in brioche, the pumpkin and the ice cream. My bride had the Swiss cheese truffle, the beetroot, and the poppyseed cake. This was high concept cuisine that happened to be vegetarian and was sublime by design and production.

Perhaps if I were wealthy enough to eat there on a regular basis I would tire of it. Perhaps. Fortunately I am spared that conundrum. Too bad I had to travel to where I could literally look through the iron curtain to check it out.