And there’s a lot to it. But first, some stage-setting. The weather today was beautiful, clear and cool. It was also the first day that wasn’t a weekend or holiday, so things were less crowded. Saying the e museum is rather large is like saying a golf course would create a bit of a mowing problem with your 18″ Sears push mower. But Germany has been around a while, so they had a long story to tell. One of their all stars was the starting pitcher in the reformation, so there was a lot of chest-thumping and high giving about that. They had a non-trivial part in a couple of world-wide unpleasantries in the 20th Century, so they had some explaining to do about those missteps, and there’s all those reallylongwordsthatjustseemtogoonandon and that takes up space, so there’s that.

So it needs to be a big museum. And it is. And it is fabulous. Well laid out. Logical, lovely. And before you go all, “well sure, it’s German designed and engineered”, believe me, it’s not all Porsche here. More than a few unfortunate architectural choices have been made. This museum, however, while trapped in the standard old school building, is really fabulous. And cool.

Yep, that’s the weird hat Napoleon wore. No way that’d keep the sun out of your eyes.

No, that wasn’t in the museum, just checking to see if you’re paying attention. This was on the street on our way to dinner Test BMW electric. I opted not to steal it. Trying to maintain good international relations. 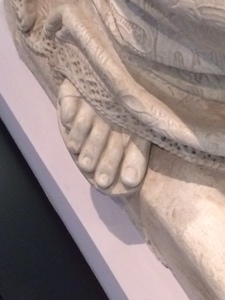 For some reason many statutes seem to suffer from Morton’s foot, where the second toe is longer than the great or first toe. Not sure what’s up with that, but, that’s just weird.

If you can do creepy really well, it is art. This is art.

This is a not to miss museum.

We also went to the museum of Jewish history. The building is very modern all angles and slopes, rising and falling, but I found the exhibit very problematic in its lack of linearity. When it’s a history museum, call me old fashioned, but I really like to be able to move from Aleph to Taw, and it doesn’t work that way. It’s an interesting place, well attended, with a very cool special photography exhibit during our visit, but the permanent exhibit’s presentation left me wishing it was otherwise.

On the 31st we visit a nearby concentration camp, then to Potsdam to view a really old gaudy castle and back for fireworks. It will be New Year’s Eve.

All that may be boring to retell, so I’m going to discuss door frames, toilets, how my daughter would enjoy it her because the women are really tall, and a big, big city with few homes. Cheers! And happy new year!!