Well, time to fess up, I knew nothing about Budapest before getting here. If I had I would have, 1. brought my swim suit, 2. not been surprised to learn it’s 2 separate places divided by the Danube. The swim suit because they have numerous hot spring spas which sound really good because the Buda side is built on a mountain and is an excellent hips and thighs workout, so some relaxation would be welcomed.

You don’t get to take pictures from this altitude in the way we do things without walking up here. A serious climb.
But a great view. 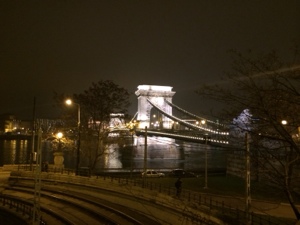 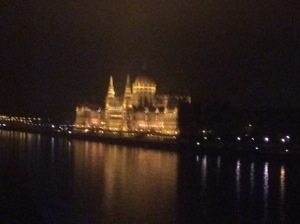 They take lighting their landmarks quite seriously. Since they’ve had to rebuild much of many of them due to Budapest’s popularity as a war siege target (a fact that is pointed to with some pride as an indicator of the city’s importance), this seems appropriate.

The people have been very nice, and the language is totally indecipherable. English is widely available, and the mass transit very good and amusing. There are at least 3 types of subway cars, from ancient to modern, buses, and street-car type trams. If Beth is with you, you’ll have no problem getting around. Like in Berlin you can buy a multi-day pass that you stamp only on the first day of use, then show when entering a subway, but not trolley or bus. It’s very confusing to me, but many things are. Beth appears to understand it all. I understand that I should stay close to her. That works. More later.